2016 Anthropologies of African Biosciences Publication TRACES OF THE FUTURE 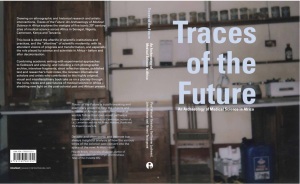 This book, based on a decade of collaboration between its editors and contributing scholars and artists, presents a close look at the vestiges of twentieth-century medical work at five key sites in Africa, located in Senegal, Nigeria, Cameroon, Kenya, and Tanzania. The contributors aim to understand the afterlife of scientific institutions and practices and the “aftertime” of scientific modernist visions of progress and transformation. scholarly presentation is juxtaposed here with altogether more experimental approaches to fieldwork and analysis, including interview fragments; brief, reflective essays; and a rich photographic archive. The result is an unprecedented view of the lingering traces of medical science from Africa’s past.

Traces of the future: an archaeology of medical science in Africa, edited by PW Geissler, G Lachenal, J Manton and N Tousignant is available now through Intellect, University of Chicago Press, and on Amazon in the United Kingdom and United States of America

The Anthropologies of African Biosciences (AAB) Group has recently moved the core of its activities to the University of Cambridge. It departs from the London School of Hygiene and Tropical Medicine (LSHTM), where it ran a longstanding successful seminar programme in medical anthropology in collaboration with colleagues at Brunel, and convened a number of significant conferences and workshops, including two at Kilifi, Kenya (in 2005 and 2009) and more recently, on medical entomology and on street-level health work, both held in London. All of these programmes have led to extensive publications.

The group has collaborated widely, both across Europe and Africa, and between social scientific and humanities disciplines, and benefited greatly from dialogue with scientists at LSHTM and further afield. We take this spirit of collaboration and adventure forward into this new chapter of our work, and look forward to developing a new academic, public and online profile over the next few months.